When asked if he has any regrets , Joseph Cohen a ninety-six year old Jewish American of Syrian descent answered that  he felt compensated by a very fruitful and creative life.  His Selected  Poetry: A Full Life ( Cohen,05) is a book  of contentment and bliss. Joseph Cohen displays his Full Life : a beautiful tableau or a film that is  beatified  in  love, classical rhythms and gentlemanship. His selection starts with a poem about his wife  Sonia  with whom he shared seventy years of his full ninety six years. “My Sonia,” is a poem that captures Sonia’s   essence the same way his Camera did. Her photographs on the walls    and her   “ smile [that] reflects the song of a sunlit rose garden”   synchronize  with the classical music that resonates in his living room to reflect  the symphonically full life he has been having.  His children also are another source from which he draws his contentment and pride.  Beth Cohen, his daughter is a very talented musician who has toured many international stages and scenes. She  “ plays like an angel” ( Cohen, 05), the poem describes the talented musician Beth is. She goes around the  world  picking musical beams from every place she visits. Full with to the rim with music, she comes back home to share her music and inspiration with the American public. Her concert  “ the art of the bow,’’ which I myself attended at  Berkley was an enchanting performance  that took the audience to many places of the world in less than an hour. In  A full life, Joseph Cohen,  pays tribute to everything  and everyone that has touched his life and enriched it. Just like a Shubert’s, Bach’s or Bethoven’s  sonata, his life was not all dream-like soft strings, it was also a life full of  rises and falls without losing its beauty ; musical tones he agilely  caught and used to soften life’s crust .  Joseph Cohen,  takes the reader into a panoramic tour across his full and balanced life. His hardships were painted in soft hues despite the firing canons, the plagues, poverty and injustices  with which he accidentally brushed or  the ones his camera premeditatedly sought to capture or the ones he lived:  a collage that adds up to a very  Full life indeed. 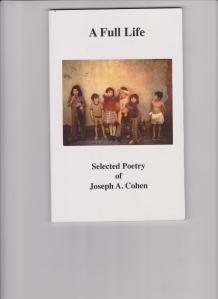 A portrait of Joseph Cohen by Jamila Ouriour