“This was what Sheik Isa; may Allah be pleased with him, said

and vanished in the fine-thin sand of the cemetery

that dust-tinged the faces of the condoling audience

while in between his broken voice, hollered the Imam, in whose voice I detected

residues of  the somberness of the dead:

“Damned, be you women,

Damned, be you women!”

My aunt, her colleagues, female relatives of the dead woman

and the other women at the funeral,

(the scarves were not big enough)

to meet their missed dead one,

to let her know while hiding a pudic laughter

Loaded with heavy sense of sinfulness

about how the Imam cursed them for attending the funeral and the prayers of the dead;

don’t they know that women, all women, are pudenda;

and that is one’s religious responsibility to cover one’s pudendum?!

May they be damned then!

Just as al Imam Sheik Isa, may Allah be pleased with him, said.

Happy Hundredth
Happy One Hundredth Einstein
somewhere, you or whatever remains of you
whatever has become of you
maybe still testing
theories that refute your theories
on this gravid planet with its gravitational axis
Newton may be doing the same
I imagine you
turning it all over in your head
protons, light, energy, ideas, masses
By now you have been disillusioned
about a lot of things:
You might have found out That the world
is much simpler than your ideas:
there is heaven and hell
and god does with you as he pleases
and that there are absolutes: death, for example;
Or Life for example is a quantum continuum
Or may be you just are no more
you came from ashes and returned to ashes
and that’s exactly when you try to kick alive anew
to collect yourself mote by mote
speck by speck into an atom
on the hope to occupy a mass
on the hope to spark an energy
in order to hang on to a drop of water
in order to be anew
yes,it might be all happening

at this very time as I am struggling
with my quanta and yours
and testing my relative absolutes, absolute relativities and primes.

A little girl was playing
When she saw a bird
Eating some seeds on the dark moist soil outside her window
She stood up
Glued her face to the window glass
Stared at the bird
Pecking on seeds scattered on cold floor
oblivious of the shadow
of the avid look of a little girl:
O. Mr/Mrs bird!
Just a little bit
Gimme gimme just a little bit!!
startled with the invisible shadow of the invisible voice
Mr/Mrs bird flew high
Followed by the little girl’s sigh
o. Mr/Mrs Bird
just a little bit
gimme gimme just a little bit!!
she threw skittles on the table
then pecked at the colorful sweet and sour fruit-like candy
one by one
then rubbed her tummy.
winds are blowing outside,
leaves are falling
heaping in yellow brown reddish beds
ominous gravid skies and clouds
are floating
paving the way for both the rain and birds
birds that are travelling in flocks
in one direction
in the high dark sky
the non-tolled highway
I glued my face to the window glass
And sighed:
O. Mr/Mrs bird gimme gimme
A little bit just little bit!!
Rain
Lots of rain came down
Gimme gimme
o. god gimme just little bit!!
please o god gimme gimme just a little bit!!
and I saw my words coming out colorful abcs out of the little girl’s little beck as she was picking the colorful sweet and sour skittles of the table;
the rain got harder
the thunder, the TV storm alert and alarm went louder;
but my hands and my face pushed against the glass harder;
becoming one with the washed transparent glass and rain
Gimme gimme more!!
I chanted silently across my new transparent hard self
As I saw trees cut in half
Text alerts, alarms and sirens
Going aflame
Gimme gimme just a little bit more, I repeated!!
as a residue of Januaries’ blizzards washed and congealed my inside
I did not open my doors
to the loud voices outside
but rather went early to bed
woke up next Easter morning
combed the outside through the glass window

before opening my backyard door
Nothing lingered from yesterday’s disaster
Except for more moist colorful leaves, twigs and broken branches
I almost shattered a blue egg a bird left on the iced slippery ground
And I said:
Thanks to the bird who left her blue egg for me
On such a Chilly Easter morning
“Gimme gimme,” the little  kid said
And snatched the blue egg just to ooze in her 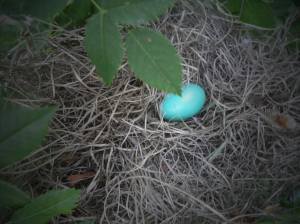 A picture by Jamila Ouriour