The weekly open-air market, also known as the farmer’s market, is a market where both farmers and fishers display their produce and fish respectively at prices that are very convenient to the common men’s low income budgets. It is however a date that people from all walks of life seek. For people who have recently immigrated to the USA it is a place that feels like home. I first sought it out of nostalgia. Most sellers and customers are North African, Middle Eastern, Latin American and eastern European while a few are Italian or Irish. The market lasts for two days which reminds me of my hometown’s open market which also lasts for two days with only two major differences: The open market in my hometown in Morocco lacks the diversity in both humans and the produce Haymarket open air Market exhibits. Located in North end Boston a few steps away from government center and Hay Market Train stations, Boston city Hall and Faneuil Hall at Blackstone street feels like a typical North African/ Middle Eastern open air market that stands an anachronistic scene from the 19th century in the 3rd millennium Boston with its highly erected and beautifully designed buildings and streets. 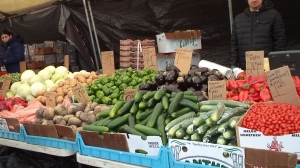 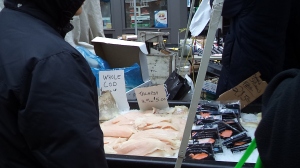 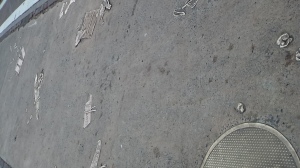 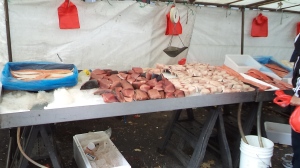 A brief portrait by Jamila Ouriour

All the pictures and illustrations were taken, painted or drawn by Jamila Ouriour